My son has been going for a while but I introduced a neighbors kid last week!! Well to understate what happened Sensei was amazing!! My neighbors kid was full of anxiety and so reluctant about going but eventually convinced him to come and even watch!! Waited on the other kids to go in and approached Sensei and told him that I had a kid full of anxiety in the car!! Well what I thought would take us weeks to do Sensei done in minutes!! Back on the mats and having a ball and now wants to be booked in for a year lol!! Sensei came out to the car and met him on his level and well … done what no one else could do today!! Thanks Sensei another kid very happy to come to class and have fun

My sons confidence has grown so much since joining. He is absolutely loving it. Very positive atmosphere

Sensei Gareth is great with children, and in addition to karate, he also teaches core values ​​about life. Would recommend!

My 2 sons have attended the club for many years now and Sensei Gareth is still encouraging them to be their best. Sensei has even opened his doors to me despite my health challenges, and I find myself training there every chance I can get. it is a wonderful thing to be able to be on the mats with your kids, learning from a great instructor. I highly recommend Sensei and his club.

If You really want Your child learn how to focus on self-improvement and boost self-esteem and motivation Elite Karate Academy is a right place to go.Training sessions are emphasize on self-control and concentration, help with coordination and of course lots of fun sometimes.
It is not just physical activities but also learning core values, such as respect, kindness, honesty, self-discipline and self-confidence.Kudos to Sensei Garreth as after few years I can see how my kids transformed physically and mentally. Highly recommended

my son has only started (6 weeks) and already can’t stop talking about karate and being a “ninja” – absolutely loves it!
Sensei is amazing with the kids – motivation, inspiration, discipline, love and care and so much fun!
thank you for a fab sporting experience 👍

My son has been going to this academy for about 8 months now and his confidence has soared.
Sensei Gareth is great with him, building him up and he knows exactly when he needs that extra encouragement.
I enjoyed watching his class so much that I joined myself 5 months ago and I am really enjoying the exercise, discipline and time out for myself.
I would highly recommend this academy.

My son Darragh has been going to this academy for a few months now and absolutely loves it. Sensei Gareth is an incredable teacher and his patience and connection to each one of his students is really amazing! the atmosphere in class is always so positive and even times when students are struggling Sensei always has great encouragement and gets them through. his assistant Eric also is great in the kids classes, both of these guys have a good sense of humour when needed but also are good at teaching the kids about the balance between discipline and fun. always makes for interesting classes.

I am back training in martial arts Karate for the last 10 months with Elite Karate , after 20 years away. I had done a few styles previously , but I have to say, I really appreciate the traditional Japanese teaching methods by our Sensei Gareth. It’s not only, a great form of exercise and self discipline….. But that hour or two a week is a brilliant personal space, to destress, get away from work, mobile phone calls ,and tasks to be done. Its just a bit of “me-time”….. 😊 The stuedents and Sensei Gareth have made me feel really welcome and I hope to bring my little lad in soon to start his martial arts journey. 5 stars ✨

We just want to say thank you for your hard work and Marco enjoys every minutes of your class. We can see his huge improvements after a year class with you. The Karate class really helps him with self-confidence and concentration. Thanks for being supportive and helpful as always.

can not recommend this academy enough, Sensei Gareth is fantastic with the children my neice nephew and my son, who has 100 nd 1 problems, Gareth is brilliant with them all.. cant believe my son is going yellow belt soon 😁 highly recommend this club.. Builds confidence especially for the younger ones 🤗

“I love Elite Karate Academy because our Sensei is really nice and it is fun.  We get to learn lots of new stuff too.  Analeigh Murray aged 8.”

“I Love Elite Karate Academy because I think it has boosted my confidence enormously.  Also Sensei is very nice.  Lara Kehoe Aged 10.”

“Back in April 2016 I completed my first ever Cardio Bootcamp class with Gareth and I’ve never looked back. I’ve lost 2 stone in weight and dropped 2 dress sizes! I’m not going to lie, it’s a tough class, but Gareth is amazing. He encourages you to work at your own pace and will alter exercises to make sure you’re getting the very best you can from the class. 18 months on, I’m still attending every week and I love it. I highly recommend it to anyone looking to get fit, lose weight & have fun in the process, joining here was the best decision I ever made… Tara O’Dowd.”

“My 5 year old always looks forward to karate, it is the one time I only have to ask him to put his shoes on once!! Sensei Gareth has the perfect mix of learning and fun. The classes are well planned and organised and I feel the children are learning something every class.. Damaris.”

“Lauren aged 6 joined Elite Karate Academy in May this year and absolutely loves the classes. The ethos here is great, the children have the utmost respect for Gareth who has a wonderful way with them. We have seen a huge improvement in Lauren’s confidence since she joined. The children are learning more than a sport here and it’s all done through fun. No hesitation in recommending Elite Karate Academy, fantastic rates as well. Melanie.”

“My two boys ages 5 and 6 started with Elite Karate Academy in February and have absolutely loved every second and keep telling me they wish they could have karate class every day. I had struggled to find an after school activity for them as they aren’t interested in ball sports. My oldest is a very shy kid so wanted something to help his confidence, and Sensei is very approachable and great with giving them all encouragement. He makes the point that Karate is not about aggression but teaching them good mental attitudes of control, perseverence and honesty (and more). The boys have just blossomed in the class and they have so much fun with the different games they don’t even realise they are training. It is made even better by the fact the classes are in the afternoon when they still have energy to burn. At the expo the boys got to see what all the other levels of students can do and they found out they passed their grade to move onto the next belt. My oldest boy told me on the way home that “This is the best day ever, my dreams came true”.”

“Lauren aged 6 joined Elite Karate Academy in May this year and absolutely loves the classes. The ethos here is great, the children have the utmost respect for Gareth who has a wonderful way with them. We have seen a huge improvement in Lauren’s confidence since she joined. The children are learning more than a sport here and it’s all done through fun. No hesitation in recommending Elite Karate Academy, fantastic rates as well.”

“Really great Academy. Knows how to engage the kids into learning through fun. Only have my kids there a week and already the oldest has given up Gymnastics so she can focus on Karate here.”

“My son attends karate classes at Elite with Sensei Gareth and I have to say he absolutely loves it as do I, Gareth’s classes are fun constructive energetic and also relaxing -highly recommend Elite Karate Academy for everybody its most certainly a family friendly business.”

“My 2 daughters joined in September and they love it. They are so excited every week when it’s time for their class. They have just done their first grade so fingers crossed the achieve their yellow tip. I would highly recommend the club especially if your child is shy & quiet as my 2 girls were and I have seen a great change in them ever since they started with Sensei Gareth.”

“Cannot praise this club enough. Sensei Gareth is a natural with the kids and my son absolutely loves both Gareth and the club. What I like about this club, is that it’s not only about the karate skills, but also about individual development and includes “mat talks” where they discuss a topic every week from respect to bullying. Looking forward to starting my younger son in the new year.”

“My daughter just joined this Dojo less than a month ago, and already there is a huge positive change in her, she enjoys the training and the new friends she is making. Gambatte Elite Karate Academy.”

“Elite Karate Academy has built my confidence and has given me a whole new outlook on life, joining the club is one of the best decisions I’ve made”

“I love Elite Karate Academy because; it is so much fun, I love training and I have a great time and Sensei teaching me.”

“I like karate because you learn moves and respect for one another. I also got to meet new friends.”

“I love karate because it’s really fun and we get to learn different techniques!” 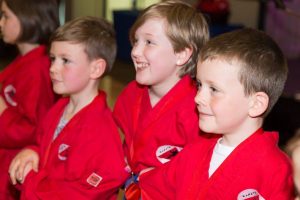