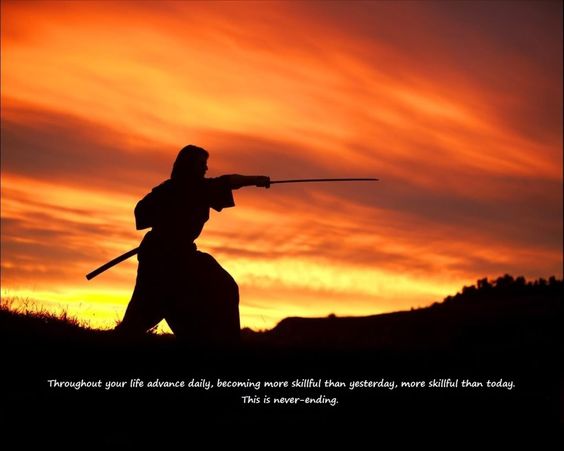 Mushin (無心; Japanese mushin; English translation “no mind”) is a mental state into which trained martial artists are said to enter during combat. They also practice this mental state during everyday activities.

Mushin is achieved when a person’s mind is free from thoughts of anger, fear, or ego during combat or everyday life. There is an absence of discursive thought and judgment, so the person is totally free to act and react towards an opponent without hesitation and without disturbance from such thoughts. At this point, a person relies not on what they think should be the next move, but what is their trained natural reaction (or instinct) or what is felt intuitively.  Years of correct training to make each technique natural and instinctive is required, as well as training of the mind.  It is not a state of relaxed, near-sleepfulness, however. The mind could be said to be working at a very high speed, but with no intention, plan or direction.  Sensitivity and flow training combined with Zanshin practice in Kata helps train this mindset.

Some masters believe that mushin is the state where a person finally understands the uselessness of techniques and becomes truly free to move. In fact, those people will no longer even consider themselves as “fighters” but merely living beings moving through space.

The mind must always be in the state of ‘flowing,’ for when it stops anywhere that means the flow is interrupted and it is this interruption that is injurious to the well-being of the mind. In the case of the swordsman, it means death.
When the swordsman stands against his opponent, he is not to think of the opponent, nor of himself, nor of his enemy’s sword movements. He just stands there with his sword which, forgetful of all technique, is ready only to follow the dictates of the subconscious. The man has effaced himself as the wielder of the sword. When he strikes, it is not the man but the sword in the hand of the man’s subconscious that strikes.

However, mushin is not just a state of mind that can be achieved during combat. Many martial artists train to achieve this state of mind during kata so that a flawless execution of moves is accomplished — that they may be achieved during combat or at any other time. Once mushin is attained through the practice or study of martial arts (although it can be accomplished through other arts or practices that refine the mind and body), the objective is to then attain this same level of complete awareness in other aspects of the practitioner’s life.  Start by being Mindful, (Obi Wan Kenobi to Luke, be mindful of your emotions, Little one), Then Zanshin (awareness) grows.  Over time with repeated practice Mushin develops.   Trained correctly in class, practice becomes habit, habit becomes a way of life, if the practice is correct.

The concept of Mushin is identical to the Japanese metaphorical expression “Mizu no Kokoro” or the “mind like water.” This mental attitude refers to a mind that is in total harmony with the Cosmos that it resembles a still pond of water without any ripples where the surface reflects a clear and perfectly undistorted image of the surroundings, like a mirror.

Mushin cannot be grasped by the intellect; it must be experienced. A Mushin mind has no Ego and no substance; it is pure Enlightenment and is the perfect realization of the self.

This state of mind takes years and years of practice to achieve. Mushin is achieved when a person’s mind is free from anger, fear, judgment or the ego during combat or everyday life.

Mushin thus implies a state of mental clarity, awareness and enhanced perception (sensory and intuitive) known as pure mind, produced by the absence of conscious thought, ideas, judgments, emotion (fear and anxiety), pre-conception, or self-consciousness. It is a state of total awareness and reaction not impeded by higher mental function or emotion, a mind more open and reactive to subtle sensory input, intuition and spontaneous action. It is a mind that is totally calm — a mind not influenced or caught up in events or others emotion, thus a mind more able to freely perceive and respond.

This required the non-conscious mind and the instinctive trained body to be free. No longer inhibited, slowed, distracted, or clogged, the mind was free to fully perceive, respond and commit to action. The mind is not fixed on anything and is open to everything; a mind expanded through the whole body with total awareness of and focus on everything.

Mushin is not about automatic reactions or lack of thought.  Mindfulness and Mushin may appear to mutually contradictory.  However, they are 2 sides to the same coin.  Mindfulness in the context of karate refers to being present in the moment, aware of one’s actions and environment

If you where training kata on the mats and a door on the other side of the room was partially opened an inch, you would know instantly.  This is Zabshin.  Zanshin (awareness) exists with Mushin.

If when suddenly attacked or startled.  One steps forward to confront the attack, rather then recoiling in fright, this could be said to be a form of Mushin.