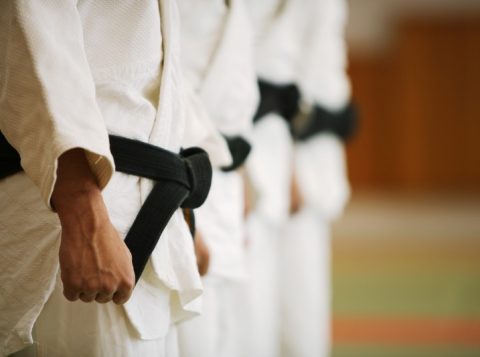 When we train in our dojo we have some rules. But the purpose of these rules is not to make everyone the same, but to allow each student to express their own self more freely.

Take Yoi or ready stance as an example. Standing feet shoulder width apart, hands clenched loosely, unmoving looking straight ahead.  This ready stance allows movement in all direction and all poosibilities exsist.  A shy person is able to stand and learn confidence in this posture, while a loud or arrogant person can stand and express humility. Both students training the same thing from different ends of the spectrum.

Other traditions like wearing the traditional suits, allows students to feel a part of a club, which they associate with the emblem on the chest. It also makes everyone the same, not male or female, rich or poor, only their belt around their waist gives them any rank.

The japanese system is based on a junior – senior relationship.  With the Sensei (Instructor) as the head of the family, with senior (Sempai) members acting as older brothers/sisters to their junior (Kohai) lower graded members.  Senior students instuct junior students under the watchful eye of their Sensei.   Senesi should always be referred to as such, never by their birth name, this is a matter of humility, courtesy and respect..  Respect is paramount in the martial arts and your Sensei has travelled further down the path you’re on.  He is there to guide  you over the obstacles they have already conquered.

Bowing is a act of humility and respect.  It is not religious but an act of humility.  Does your ego refuse to allow you to show respect to yourself or others.  Bowing is showing respect to your dojo, thank a training partner for allowing you the chance to improve, or bowing to your own potential to reach your authentic self, and sometimes recognising the difference in rank between yourself and who you’re bowing too.